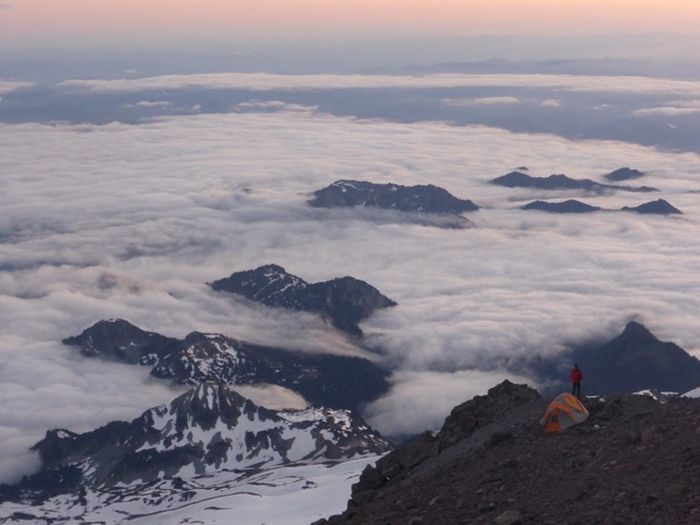 It’s an exciting time for us here at the 0 to 8848 expedition, with the gaining of two major milestones in our journey to Everest. We have just completed our first major ascent in the form of a 10 day expedition to climb Mount Rainier, and we have secured our first major sponsor.

Mt Rainier was our first peak at the heady altitude of 4,400m and our first face-to-face meeting with Alpine Ascents, the company with whom we aim to climb Everest. It put all our training of the past five to six months to the test, and gave us a reminder of the demands of climbing at altitude. It was nerve-wrecking, challenging, and ultimately very rewarding.

Our other very exciting news on the expedition front is that we have officially received sponsorship from Tiso, one of the UKs leading outdoor retailers. We mentioned in our last article that we had a really encouraging first meeting with Chris Tiso, who was introduced to us by our patron Mark Beaumont.

The final result of that meeting is that Tiso have agreed to be the exclusive equipment supplier for 0 to 8848, and have provided all our technical gear for Mount Rainier! It’s awesome to have access not only to this fantastic high spec gear, but also the advice and expertise of the Tiso staff. We are hugely grateful for this investment and show of faith, which we will be working very hard to live up to.

The week before Rainier, we spent a very surreal afternoon at the Tiso Outdoor Experience store in Perth picking out the gear, literally a dream scenario for any outdoor enthusiast. We finally walked out with massive gear bags full of kit. We’re still feeling a bit like burglars.

Our trip to Washington State was pretty hectic. We had 2-3 days there to overcome our jet-lag and do some sightseeing before heading to the Alpine Ascents head office for a 6am start to meet the rest of our group. There we were briefed on our itinerary for the next 10 days which entailed six days training on Mount Baker, followed by a four day ascent of Mount Rainier via the Kautz Glacier.

One of the first things we received instruction in was one of the most important for the 10 days to come: pooing in a bag. In the US, as here, there is a strong ‘leave no trace’ ethos, but due to the lack of multi-day trips we have completed in the UK, we’ve had no previous need to practice this particular skill. In short, wag-bags are the way to go, and practice makes perfect. 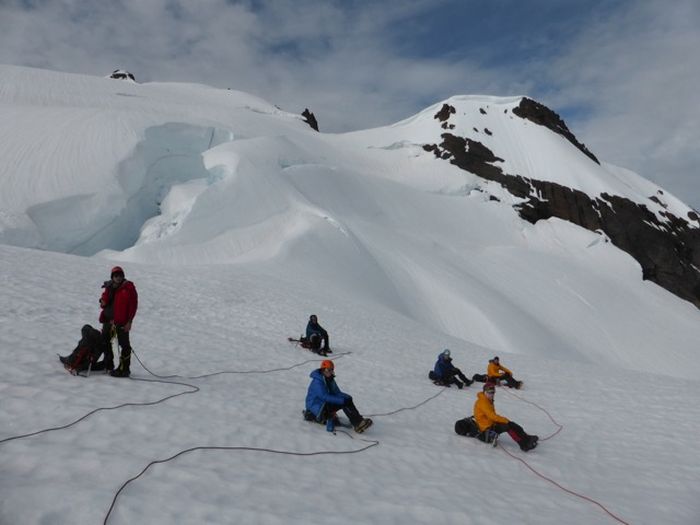 The following days saw us learning and practicing a range of mountain skills, including glacier travel, glacier rope work, knots, mechanical advantage, crevasse rescue, ice climbing, and movement on snow and ice (god bless the ‘rest step’) among other things. Although we had done a few of these things before (particularly with Glenmore Lodge in January), a refresher course was much appreciated and the new skills kept us more than busy.

In particular, the day was spent learning about crevasse rescue followed by each of us actually carrying out a rescue with a real person in a real crevasse on the end of the rope. It was both interesting and really useful to know if we are to do any glacier travel of our own in the future. We had unseasonably warm weather on Baker, but thankfully the summit day was not quite as hot with a thin layer of high cloud giving us great views with a little shelter from the direct sun.

The Baker summit day was one of the hardest climbs of our entire time in Washington. We started early at around 5.30am and ascended across snow and ice in our rope teams, skirting around crevasses and avoiding avalanche run-off zones.

Just 30 to 45 minutes in, we were held up when one of our group-mates dropped his ice-axe. As it was not on a leash, it slid down the hill (making a ‘ting, ting, ting, ting, ting’ noise as it slid over the hundreds of icy ridges) eventually coming to a stop a good 100m away. We all stood and watched its progress in silence, before a guide unroped to go and fetch it. Our unlucky group-mate was not allowed to forget this, with regular ‘ting, ting, ting, ting’ impressions for the next four days. 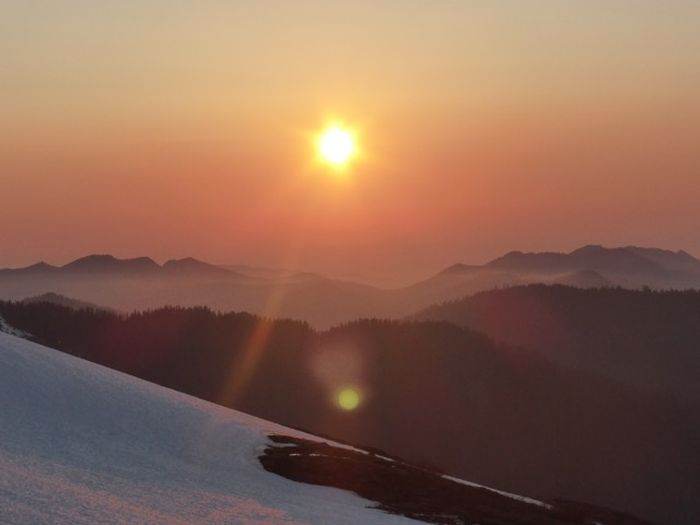 As the day wore on, the climbing got steeper and steeper as we headed up the Roman Wall to the summit ridge. After about six hours of climbing we walked along the ridge to stand triumphant at the summit of Mt. Baker (3,286m), the highest point in our training so far. The descent was largely uneventful, and we slept very well that night!

The Rainier portion of our trip via the Kautz Glacier is a more difficult and technical route than the more common Muir route and consists of three days of ascent, followed by one day of rapid descent.

The first day saw us leave the encouragingly named Paradise (1,600m), to head for low camp (2,200m). This was a very pleasant trek along and then across the Nisqually Glacier, before climbing an ice chute for another few hundred meters to reach the camp. Unfortunately, for an hour or so before we reached camp, we found ourselves in the middle of a cloud bank, which we stayed in for the entire time we were at low camp. This not only reduced photo-taking opportunities, but meant that in the morning our tent was dripping in condensation, and for the rest of the day our gear was in a permanently damp state.

The next day everybody was keen to get out of camp and into what we hoped would be clear air above. Gear packed, we set off in our rope teams to slowly ascend from the 2,200m at low camp to 3,400m at high camp. The day was long, but the air was as clear as expected, and we dug out our tent spaces in the snow at an altitude higher than we had been on the summit of Mt. Baker just three days before.

The views from high camp were spectacular. Mt. Rainier is a volcano, which juts out significantly higher than its immediate surroundings. Thus, with clear weather, we were treated to the sights of Mt. Adam, Mt. St. Helens, and even Mt. Hood, rising above the sea of cloud that blanketed all but the higher ridges in between. It was a truly wonderful location which was only added to by the looming ice-cliffs from the Kautz ice cliffs, which we would thankfully not be climbing!

The weather looked good, and the plan was set to make our summit bid the next day. That meant an alpine start at 2am for breakfast and then to start walking at 3am. The extra 1,200 m from low camp had made a significant difference to the temperature, and we were thankful for our fantastic sleeping bags to sleep as much as we could. 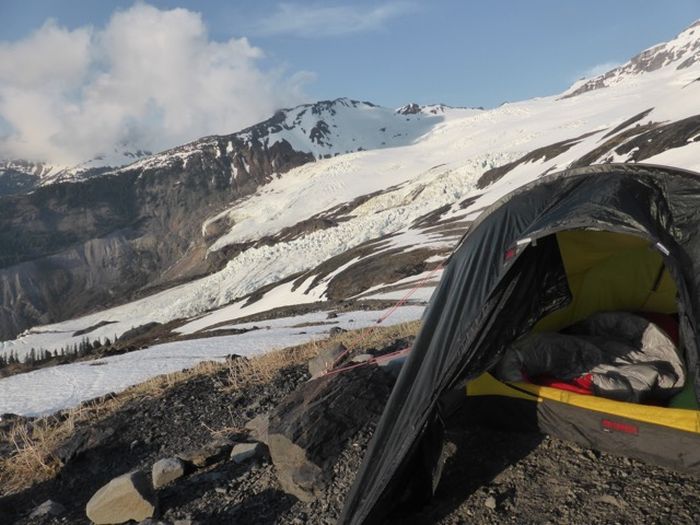 In fact the night was cold enough that the next morning we found our boots, damp from our exertions the day before but carelessly left out in the boot well outside our tent, frozen solid. This made putting them on an awkward, tiring, activity requiring fine balance for that time of the morning. Thankfully, the relief felt when your foot finally slides into the liner boot overcomes the chill, which is soon eradicated by the superb insulation. The lesson was learnt, however, and boot liners should stay inside the tent when it’s cold, not just inside the fly!

The morning was clear and crisp, and the rising sun found us anchored into an ice-screw half way up the Kautz glacier looking down a drop of a couple of thousand feet. The glacier loomed above at a 50 to 60 degree angle for several hundred meters, and as Jambo (the guide for our rope team) climbed up to secure us to a higher anchor, we shivered in the shadow of the ice wall. Unfortunately we were required to do some time consuming ropework to provide him with some more slack. This meant that when the time finally came to climb again, we were freezing.

The climb was steep, but we soon developed a pleasant rhythm as we climbed together, counting a medium-paced ‘four’ as we kicked or swung our axes into the ice. Left-axe, right-axe, left-foot, right-foot. Left-axe, right-axe, left-foot, right-foot… Each beat accompanied by the satisfying ‘thunk’ of metal engaging with the glacier.

Although slow progress, two full-rope climbing pitches got us to ground where we could revert back to glacier travel, and continue on our way. By this time, we had unfortunately dropped behind the others, who had not had any rope problems, and it was a full glacier pitch (an hour to an hour and a half) before we caught up with them for a break.

By this time several hours had passed since we set off, the sun was up, and it was another very clear, hot day. The summit ridge was in sight, but still a long way off as we set off again. This proved to be an extremely long pitch, lasting over two hours. With the sun beating down, we both found it difficult and dropped a little behind the rest of the group.

However, with some small stops for water, we reached the ridge of the summit crater 15 to 20 minutes behind the others, who we saw sat further along just below the true summit. On reaching the summit at 4,392m, we were comfortably at the highest point of our training, and more than the height of Ben Nevis above the cloud line.

The descent was very hot and long, causing us to come down with some mild sun-stroke, and some milder sun-burn. The main delay was being lowered back down the Kautz Glacier, which we all would have preferred to abseil. The lowers were long (two rope-lengths), bumpy (due to the excessive rope-stretch), and ultimately, not really long enough, as we had to do a little down-climbing at the end in any case.

The descent the next day back to Paradise took just three hours or so, and we collected a few stares as we walked past tourists in sandals with our large backpacks in almost full alpine gear in 20+ degree temperatures!

We owe huge thanks to all of our group as well as the guides, who made this a truly unforgettable experience. We are back from Rainier much more tired than when we left, but with some significant experience under our belts and an indication of what will be expected of us in the years to come if we are to make it to the top of Everest in 2017.

If you want to learn more about 0 to 8848, check out their blog or keep up to date via Facebook and Twitter.