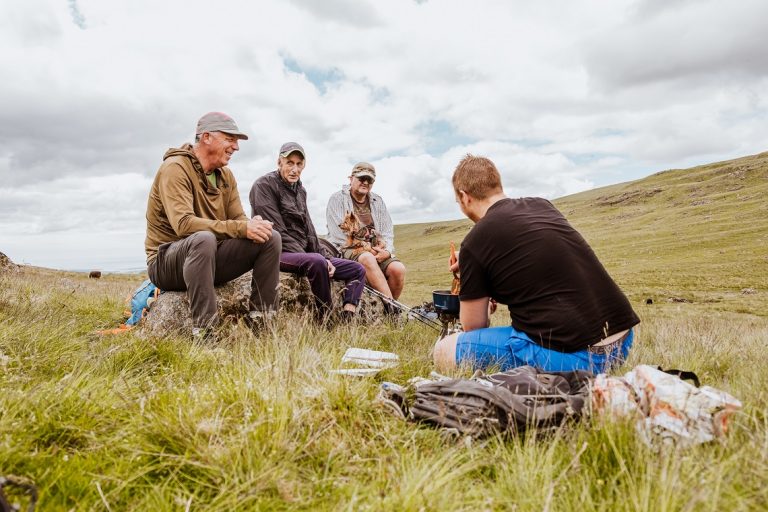 Not so long ago, you’d have found HARRISON WARD propping up the bar with 20 pints and a packet of fags. Now, you’re far more likely to spot him cooking up a storm on a remote mountain top in the Lake District

Better known as the Fell Foodie, Harrison Ward has made a name for himself preparing elaborate meals in remote locations. He’s even cooked for Mary Berry. But for 12 years, he hid his depression, finding false solace at the bottom of a pint glass.

Hiking and cooking on the Cumbrian fells helped Harrison find his way back to sobriety and better mental health, and he’s as frank about his journey through addiction and depression as he is about the latest restaurant-worthy meal he’s thrown together in the middle of nowhere.

“I grew up in Cumbria but didn’t properly engage with it until I returned to recover from alcoholism. I appreciated the appearance of the hills and lakes but the closest I got was coffee and cake in Keswick.

From the age of 13, when I hit puberty, I was also hit by a complete sense of self-loathing, insecurity, and demotivation — all aspects of what I later found out to be clinical depression. I have an extroverted character, but suddenly I felt insular. I didn’t say anything to anyone. I just lived with it until around the age of 18 when I started working in the pub trade and found escapism, and sedation, in alcohol.”

“Drinking allowed me to be the sort of person I wanted to be again. By the time I moved to York for university at 19, I was regularly consuming 15 pints a day. I ballooned in weight and took up smoking full time. At its height, I was drinking over 20 pints a day, weighed 22 stone, and was battling suicidal thoughts. I went on like that until about 25, constantly looking for a way out of this mortal coil, both mentally and physically.

Once, when I was 21, I even phoned home from a payphone in the early hours, completely inebriated, with the sole intention of saying goodbye. That was when people close to me discovered the illness I’d been keeping secret for so many years. I was driven home that weekend, but I wasn’t willing to change yet. I went straight back to York and carried on in exactly the same way.

Somehow, I eventually found myself in a relationship.

I was in two relationships really, both with this girl and the alcohol. The two didn’t collide very often, but alcohol generally leaks its way into that life and there were moments of arguments and interventions. In the end, I was unfaithful to my partner under the influence. That was the end of the relationship, but it also made me see how far I’d fallen.

I’d become someone I wasn’t. I came to terms with the fact that I’d become an alcoholic.

Initially, because I wanted to win my partner back, I vowed to quit alcohol and cigarettes overnight. I took myself back to Cumbria and was completely open with friends and family about my alcohol and weight issues. In return, I received a huge outpouring of support. Friends turned up on my doorstep offering me solace through fitness. I was taken cycling and to the gym. Then one friend said he was taking me on a hike.”

“I had no idea what to expect. Even though I grew up in Cumbria, I’d never really been hiking before so I just put on what clothes I had to hand. I was completely penniless at the time, with debts and bar tabs and old rental fees to pay off, so my outfit was an old jumper, a pair of swim shorts and a pair of old trainers.

My friend took one look at me and said, ‘You can’t go hiking like that!’ On the way from Carlisle to the Lake District, he pulled over at an outdoors store and bought me a pair of boots. Then he drove me to the base of Blencathra and frogmarched me to the top.

This was a completely different world for me. I was still going through the throes of withdrawal and pining for my ex, head pounding from the booze and fags, so I don’t recall much from the walk up, but I do remember staring at my feet, moving little by little, getting to the top. My friend just looked at me and said, ‘Right, Helvellyn next week.’ Not even a “Well done!”

As promised, a week later we set off again on the steep march up Helvellyn from the Thirlmere side, which is like a staircase. It was a sunny day and when we reached the top of that mountain and looked across at Striding Edge and Red Tarn below, something just sang to me. It felt like a new addiction was ignited. I enjoyed the rush of endorphins I got from hiking up there. It felt like an achievement.”

That climb also felt like a physical manifestation of what I was going through. That uphill struggle of putting one foot in front of the other, heading forward, not knowing the direction but not having any other choice. That sense of achievement, and what was becoming a sense of redemption, became a huge motivator for me.

That Helvellyn hike was only three weeks after I’d vowed to leave alcohol behind after being on 20 pints a day. Scafell Pike followed, along with many other Lake District fells, Ben Nevis, and Snowdon. I was also convinced into taking up running and 1km became 2, became 5, 10, 15 and then 20km. Eleven months after I was falling asleep at the end of the bar with nothing to my name, I was at the start line of a marathon. It showed me how much can change in a year. I was becoming the first person I wanted to become.

Unlike hiking, food has always played a huge role in my life. My mum worked nights as a nurse in the infirmary so, growing up, I spent a lot of time with my grandmother. She was a keen cook, a typical Irish housewife who always found ways to put me to work! There were plenty of big family events with people gathering around the table to catch up and laugh. I loved the fact that food brought people together. It was a chance for everyone to sit down and just stop.

We can be so busy in our lives and I think, generationally, we’re losing that a bit by eating on the go or on the sofa instead of sitting down together.”

NOT JUST ANOTHER SANDWICH

“During my darker days, I didn’t enjoy cooking. It took a backseat and alcohol was my sole focus. I found myself stumbling in and out of kebab shops a lot more than I did gastropubs. But as I removed alcohol from my life and threw myself into fitness, I started going back to cooking fresh produce. I find the whole process of preparing and eating good food mindful. It’s good for body and mind. You wouldn’t put bad fuel in a car and expect it to go 100 miles.

To begin with, I took extravagant packed lunches out into the hills. I got a lot of comments from people about what I was eating — perhaps a nice risotto or stew I’d knocked up the night before — while they had their soggy clingfilmed butties. Then someone mentioned getting a stove and cooking out there from scratch. Not one to shirk a challenge, that’s exactly what I did!

The first meal I cooked like that was at Rydal Water. For me, it was a simple sort of offering, a poached egg dish with some bacon on a little toasted muffin with a red onion and balsamic jam. I made it all from scratch on my little wood-burning stove. I was trying to learn new skills like how to transport things outdoors, use different techniques and recreate culinary practice on minimal equipment.”

“Since then, I’ve made pastas and breads and all sorts out there. I’ve carried a pestle and mortar and a nutmeg grater! The most complex dish I’ve done so far on the fellside was a katsu curry for me and a friend. I made everything outdoors, from cutting and breading the chicken to shallow frying to making the carrot and curry powder sauce and the sushi sticky rice, as well as little cucumber and carrot ribbons on the top.

It involved multiple components and there was hot oil involved so I also had to think about letting that cool, packing it all back out again and leaving no trace. It was one of those days with fierce, biting winter winds that can make you think ‘Why the hell are we doing this?’ But the meal was worth it in the end. It was delicious and I was chuffed to achieve making it on the hillside.

It’s all been an exciting journey. I’m still sober to this day and Fell Foodie has become a full-time entity for me. Cooking up delights in the mountains has led to some wonderful opportunities so far, and by sharing my story further I hope it can help others and be a bit of a voice for the voiceless.”

You can find out more about Harrison Ward’s sober life and fell hikes on fellfoodie.co.uk. There are plenty of photos of mouth-watering food in equally mouth-watering places on his Instagram @fellfoodie.